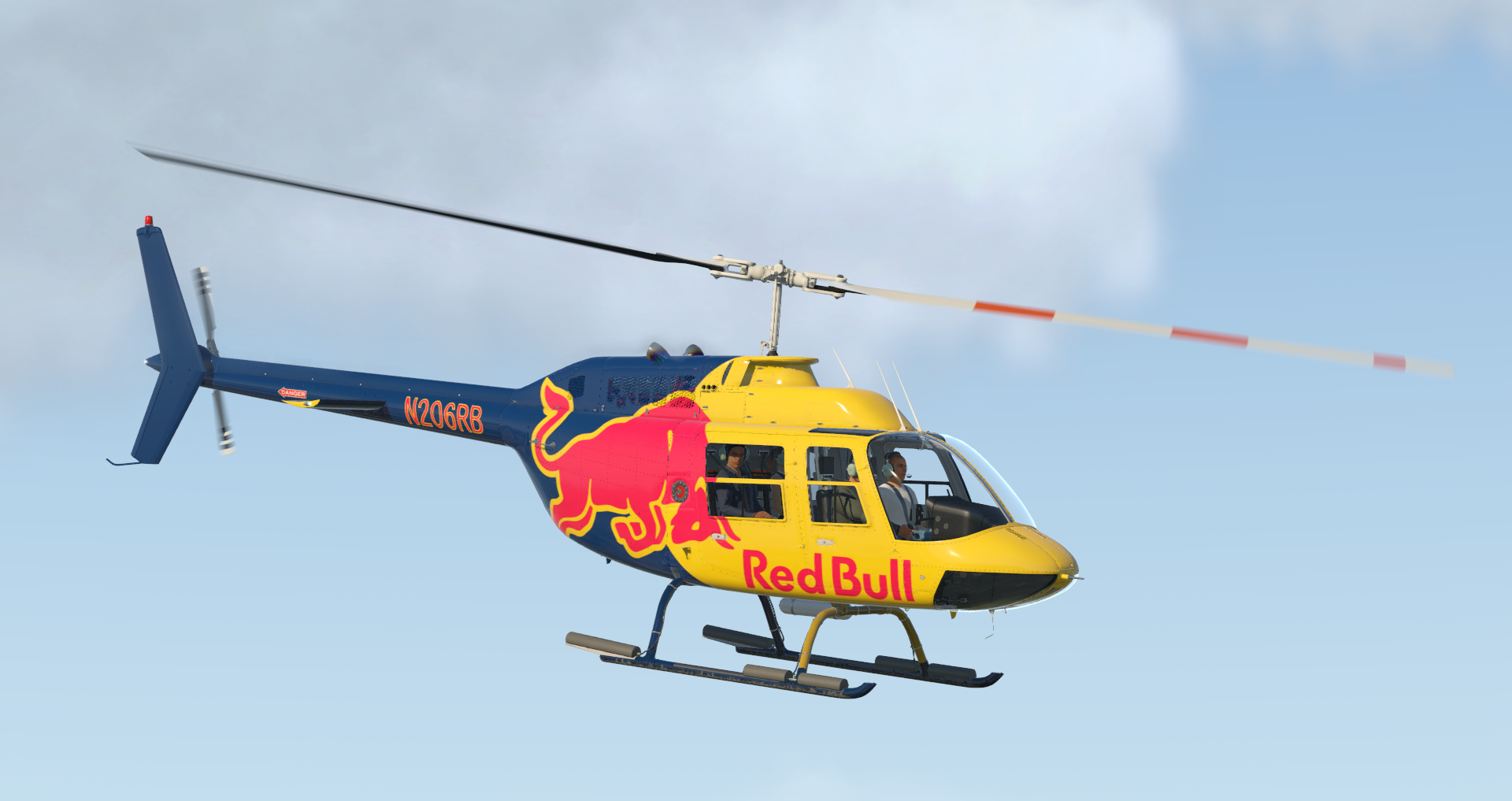 The Cowan Simulation
206B3 Project
Changelog

The stability augmentation system (SAS) is now available. SAS is an attitude-based flight control system that can be used to make flying the helicopter much easier. The SAS flight control computer controls servos for each pitch and roll axes. The system is custom modeled and coded to be as realistic as possible.

Sim pilots typically use two different types of hardware for the cyclic, whether it’s a table top joystick or a full size cyclic, the difference is spring or spring-less. Since it’s programmatically impossible to physically center the majority of spring-less hardware, such as a joystick/cyclic, SAS will hold the attitude the hardware is positioned to. If using a self centering joystick/cyclic (with springs), letting go of the grip will cause the helicopter will recover to a level attitude. These are limitations of most simulation hardware and apply to both SAS and Force Trim.

Along with SAS, the system also has an autopilot with HDG, NAV, SPD, ALT and VRT modes. There are two buttons located on the cyclic that work with the system, force trim release and autopilot disconnect.

There is a manual located in the “MANUALS” folder specifically for the SAS/AP system.

There was only one change to the flight model. A lot of pilots mentioned that the cyclic was a bit too responsive on the B3 but the L3 was fine. This was adjusted very slightly and accurately. Some sim pilots might not even notice it. What’s nice is that the SAS system is available for inexperienced simmers.

You can find a utility inside of the configuration manger that’s for calibrating different kinds of hardware throttles. Some hardware throttles have idle stops that work just like the real machine. They have a mechanical ring to release the throttle. Some have a switch that can be mapped to the idle stop command and some do not. Every piece of hardware out there has a different value between 0 and 1 where the stop locks into place. The virtual throttle’s idle used to always be set at .28 but now you can change that value with this feature and select whether or not to automatically release it. Instructions are in the config menu.

Everyone can thank Julien Lebrun for consistently contributing new liveries, amazingly detailed liveries. When I say consistently I mean he has been working on them every single day, just as I have with the development side. Big thanks to him. 🙂

You can turn on this feature by going into weight and balance then selecting sling object. Inside the “SLING OBJECTS” folder you can select the item you wish to be on the end of the cable. A huge thank you to Joe Hudson for providing his modeling & textures of the kit, the hook and mechanical release on the cyclic.

Added the ability to remove doors individually on the 2nd page of the configuration menu.

Added option for helmets on pilots

Other updates to bring the B3 up to speed with the L3 release.

The fmod sounds got a huge makeover. Things should be more in tune now and outside is different from inside. My mistake for messing this up at the very last minute before release. I seemed to have omitted several sounds and completely messed up the levels for inside, outside, opening doors and the window. Several new sounds were added and lots was tweaked. Thanks to you who reported it to me.

All of these got a HUGE makeover. All brand new coding and works like the real machine. We are still using “wing sweep” for mapping hardware for the “throttle”. The idle release will stay above idle until you click the idle release button. The button was backwards and that is fixed as well. It pops OUT when rolling past the detent and pushes IN when you unlock for rolling down to cut off. The RPM inc/dec switch works smoothly now. The governor coding is what made this release late. This is a big step up from what we are used to and took me how many years to figure out. Hope you all like it.

The paint kit is the same but the Photoshop files were updated to match the GIMP files. There were some parts missing.

Thanks to Dark Angel we have tons of new liveries and some pretty amazing ones as well. With his hard work we now are up to 60 paint jobs!!! Thank You Sir!

The option to hide the pilot at all times is now available.

The HSI is working as intended now. The deviation bar was not moving its full range and was indicating the wrong direction.

Custom vibrations and head force are now available from the config menu. When rolling and pitching then the camera will move so you don’t have to always look around. Kind of like RXP and it’s compatible with RXP as well. You will get some decent vibration when rolling through the yellow resonance band you see on the RPM gauge. None of this works in VR of course, since you are in control of your own head.

The tail rotor was spinning the wrong direction on start-ups and shutdowns at a low RPM. This is an issue with X-Plane I believe. So now it spins the correct way and when RPM increases then the wrong way for a few seconds and then back the correct way. You don’t notice it because it’s spinning fast but I thought I would mention it.

The correct REG numbers are now on the panel for each livery. The paint kit also includes a texture just for this. Just stick it into the livery objects folder.

The torque gauge is calibrated and you can hear the change in pitch when torque changes.

Some small bug fixes and many other small details.

Extensive work went into getting smells right. Some people were having issues with smells per second but that is sorted out. Now you can smell the Jet A1 fuel burning along with human cabin smells (not sure why that was requested) and more… okay I will stop now. HAHAHH!

This is what I could get done in 7 days everyone. If I missed something you wanted or requested then I’m sorry. I have a huge list and I will get to you all in time. I wanted to get the important stuff out of the way and I still have work to do on the 500E and 222 updates. I will keep pushing forward and I hope you enjoy my work.

This is an ongoing project and will be updated.