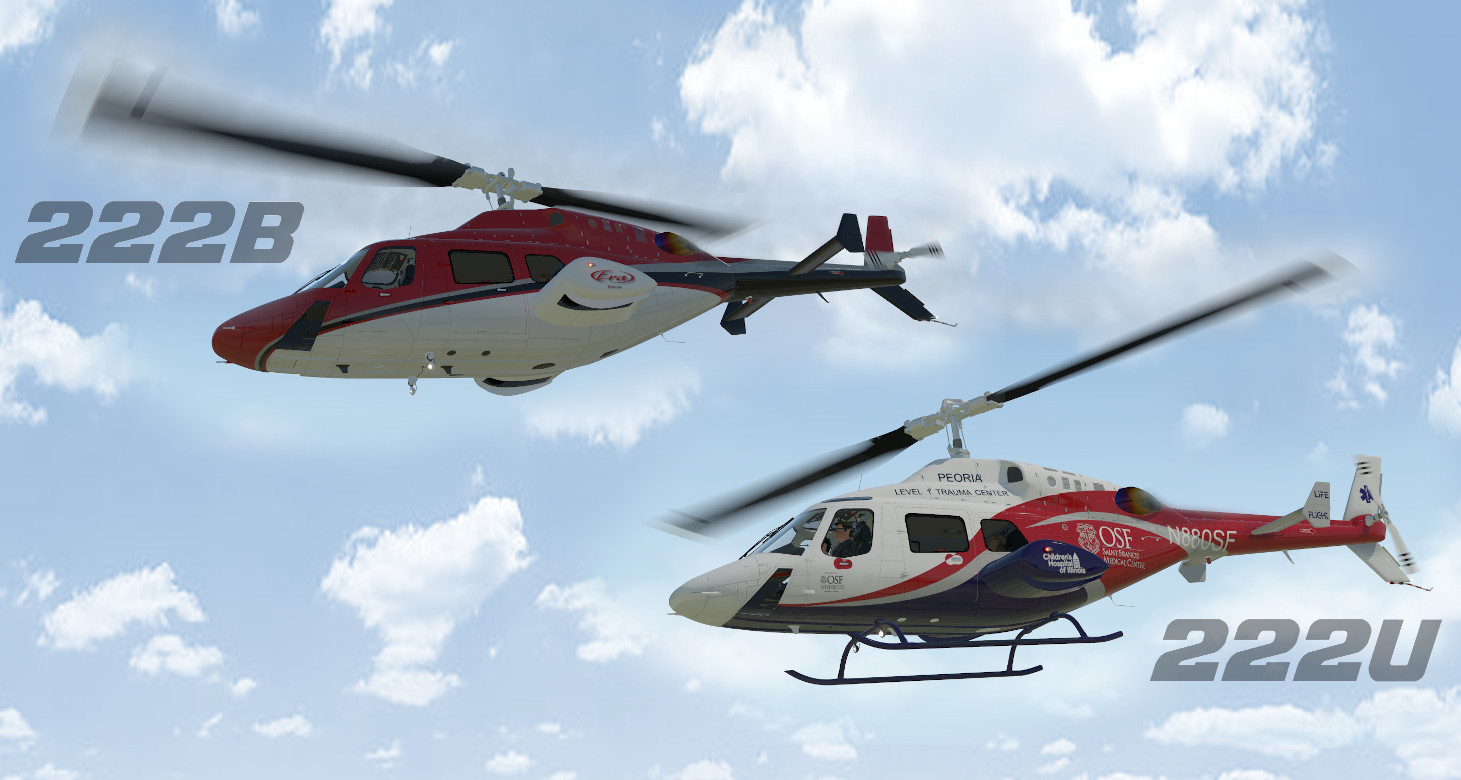 The mode selector/flight director system was changed from the ground up. As requested by many simmers, the ALT knob will now change the altitude when ALT is selected. Previously, the selection made with the knob was where the VS would settle. Now when pressing ALT (have to double click) your current altitude will be held and can be changed with the ALT knob.

The top three buttons, ALT, IAS and VS can only be used one at a time.

ALT: Holds the current altitude and programmable as described above.

VS: Holds the vertical speed with cyclic at rest. Self centering joysticks need to be centered first.

ILS: Used to make a full ILS approach. Pressing the ILS button with a LOC frequency tuned arms both the localizer and the glideslope mode.

BC: Engages back course approach mode.

GA: Activates go-around mode. When engaged the flight director computer commands a roll level attitude and a pitch attitude of 750-1000 FPM rate of climb. The pilot must maintain desired air speed by adjusting the collective.

The fmod sounds got a huge makeover. One of the issues with the CowanSim 222s was muffled sounds. There was a high pass hiding in one of the main sound banks, essentially chopping off half of the highs. (same with the old 500E sounds) The entire fmod project was scrapped and brought back to life with several new approaches and sounds added.

Rotor animations are now complete with the trigonometry included so the pitch of the blades follow the swash plate. Rotor textures and mapping were updated too.

The 3 needles on the torque gauges for both engines and the rotor were calibrated at max weight. They should be more accurate now.

This selector was broken on the 222UT. It is now working.

A ground power unit was added and is accessible in the clipboard and upper menu options.

There are too many messages from users who are stuck at idle when starting with engines running. The idle stop relays on the collective box need to be activated to unlock each throttle from the idle position. After that you have 5 seconds to roll the throttles to off or full. Now when starting with engines running the throttles are both set to flight idle to eliminate the confusion. This is all in the manual.

Noticed the fully automated start camera views are not compatible with X-Camera. It would have to be disabled for that to work correctly.

Bug Fix! There was a bug in the last update. The menu option to change from luxury to medical didn’t work correctly, it would only work using the clipboard. This is now fixed and available for download.

ABOUT OPTIMIZATIONS AND THE FUTURE

Laminar Research has been working hard at optimizing the sim for some time. This is great news. The 222s are unique and have tons of animations, code, highly detailed modeling and systems depth. Comparing the 222s to to other aircraft isn’t helpful since they are completely different animals. The 222s could be stripped down to a simple model with basic functionality and 2k textures but this is not the goal for these helicopters. It has been tested, but gaining 5 frames per second just does not justify the cost of quality. But, this is 100% being worked on and a very long process.

Things that were tested: minimized poly count, converted .png to .dds, 2k textures, optimized code, optimized .obj hierarchy order, no 2 sided objects, object kill where possible, prefill and some others I’m probably forgetting. Some of these things were committed to and some things made no huge difference, like .png vs .dds.

The real fps hit for users with weak machines is animations and manipulators. Manipulators live within the *_cockpit.obj and animations within this object are very expensive performance wise. The biggest gains with fps were achieved by simply removing the cockpit object from the equation.

But what does this mean? We have to have all the manipulators and their respective animations within this file or we have nothing. Everything you can click on, or manipulate inside the cockpit, needs to be there. Lots of those hidden manipulators need to be animated so they can follow what moves, like door handles or levers.

So what changes can be made? The panel configuration options that are accessible on the clipboard located in the door pocket are under the microscope now. We all want options, but they come at a cost. Currently, most configuration options are using the show hide method, so even when they are hidden they are still being drawn. This is not the case for the passengers, they are using object kill, so when they are hidden they are not being drawn. This is something that can be changed with a plugin. I would probably write the plugin using SASL. But, if this turns out to save us 3 fps then the massive amount of time involved just isn’t justified. More testing is being done.

X-Plane keeps getting better and better. Laminar Research is working hard and optimizations have come a long way in the last year. With the newest beta, 11.51b2, I had an amazing 20 fps increase. The 222s were designed for 11.50 using Vulkan. Flight sims are rough on computers but we are headed in the right direction. If above 30 fps you’re doing good, if above 45 fps you’re golden.

The 222s are being developed on an aging system and they run around 50-60 fps. The system? FX6300 OC to 4.5GHZ, 16GB RAM, GTX1060 6GB running on SSDs. That is an aging system but it keeps up fine. Way better than an airliner or other complex aircraft I have tried.

So, stay with me folks! If you have a machine that struggles with fps then don’t worry, between my work, and Laminar Research’s work, things will only get better. A $3000. PC always helps but we should not need to go there, I know I don’t. The sim is only getting faster with time.

Thank you for reading to the end,

This helicopter is a work in progress. Over time, known issues will be updated and fixed as well as many additions.

The initial version is a brand new luxury style that is very clean. A medical and true utility version is in the works and will be available at a later date.

Please take a quick look at the known issues and WIP items: